Leonardo’s SKIRON3D® system is providing meteorologists with extremely precise three-dimensional and wide-ranging measurements, thanks to the Light Detection and Ranging (LIDAR) technology underpinning it.

Based on the company’s heritage and expertise developing meteorological radar systems and integrating them with airport sensors, SKIRON3D® is of fundamental importance, especially in the aviation sector, using a new generation LIDAR Doppler sensor and guaranteeing highly reliable and advanced weather forecasts. In particular, when monitoring wind conditions, it provides data on critical and potentially dangerous situations for air traffic, such as storms, wind shears (a powerful and sudden gust of vertical wind capable of pushing an aircraft towards the ground during landing), gusts and turbulence including wake vortex generated by the aircraft wingtips when taking off and landing.

Predicting the imminent formation of a wind shear near a runway threshold could avoid a potential air accident, with SKIRON3D® providing pilots, air traffic controllers and meteorologists with the real-time information they need to handle potential risks. The LIDAR technology can also be combined with weather radars such as Leonardo's METEOR 60DX and with LLWAS (Low-level wind shear alert system) to great effect. 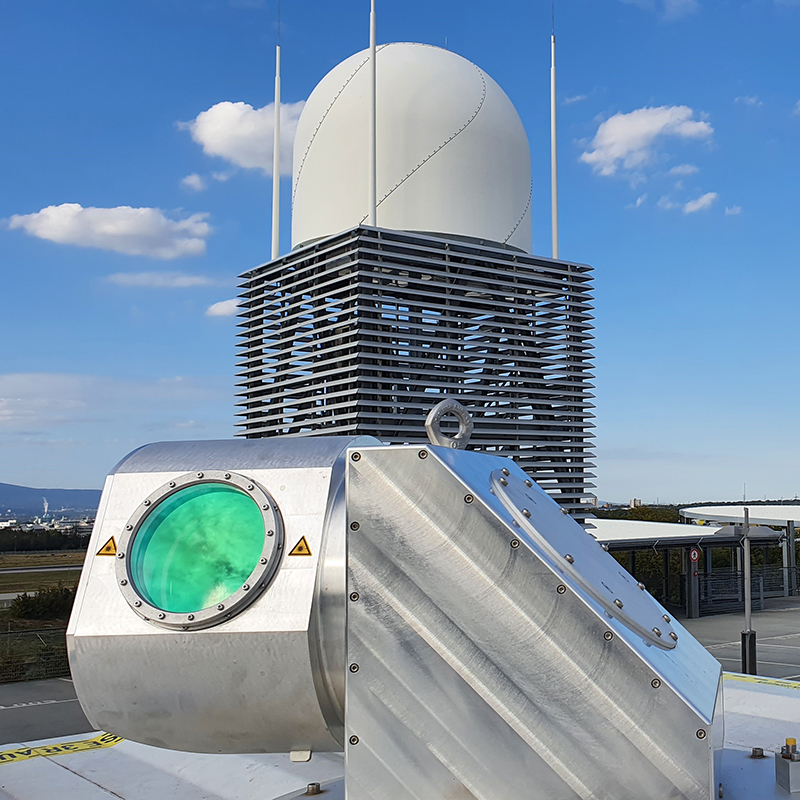 Furthermore, SKIRON3D® can play an important part in assessing air quality in the fight against pollution. The system emits a laser pulse and detects reflected light to determine values relating to radial wind speeds, with the highest accuracy and in 3D. SKIRON3D® also measures the backscatter coefficient from aerosols in the atmosphere, i.e. the optical parameters influenced by particles’ properties, such as density and size. This is a great way to have a precise and immediate data reading related to air, to understand the effects of pollution on urban and densely populated environments.

Since September 2020, SKIRON3D® has been operating in Frankfurt Airport, one of the busiest in the world, as part of an ongoing scientific project that is giving very promising results.

Outside of the aviation sector, SKIRON3D® is being used by wind farms to set the optimal operating and management parameters of the turbines. The resulting corrective countermeasures allow us all to live in a healthier environment.

In this site, we use technical and profiling cookies, own and third party, and other technologies that collect your browsing data to analyse use, improve your experience and personalize the content and advertising. Click here to learn more about our Cookie Policy.
This site does not use marketing/profiling cookies. By clicking on "Accept" or continuing to use the site, you agree to the use of all cookies used.
Accept